Bio-Strip-Till uses deep root plants to open up soil and still preserve structure and mycorrhizza. We are also looking at using mechanical strip till with bio-strip to keep berms from eroding in heavy rain events. 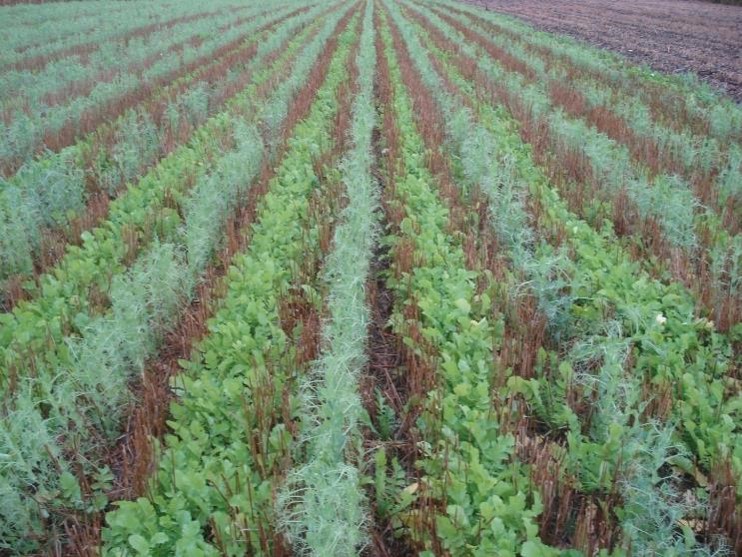 We found the bio-strip till to be a pleasant surprise as we got into those plots with the combine. The summary of these plots are as follows. Bio-strip till was added in the KH rotation where we are planting soybeans followed by winter wheat followed by corn. The focus on this rotation is planting winter wheat following soybean as we feel this is an opportunity to introduce winter cereals into the predominant corn soybean rotation in the area. Winter wheat’s benefits would be several including planting in the fall thereby reducing spring workloads, utilizing more moisture in fall and early spring, nesting habitat, yield advantage over spring wheat, and earlier combining. The late fall growth and early spring green up would especially help manage salinity if a winter cereal were flown on standing corn in early September or late August. The challenge to planting after soybeans would be winter hardiness. We feel that planting a cover crop after any winter wheat crop is essential to use up moisture in what appears to be a new normal of having excess soil moisture.

The idea of bio strip till would be that you would concentrate the cover crop in rows where corn would be planted the following year. Theories and idea are many. What we did was to plant radish in 30 inch rows in 2009 following the winter wheat where the corn would be planted in 2010. We also planted peas in between the radish rows also on 30 in centers. Both cover crops were seeded with our 7200 John Deere row crop planter using Kinze brush meters. The radishes were planted heavy and developed a thick stand. Large roots did not develop as expected with planting high population in rows. The peas germinated well and grew nicely. The corn was planted into the radish rows easily in the spring of 2010. The radishes had completely decomposed by planting time. Some of the pea plants did remain but did not interfere with planting. The ground was a little firmer from the increased traffic of the cover crop planting but planting and germination was fine. The yield results proved positive. Of 53 plots of corn planted the bio strip till plots ranked 5th, 6th and 42nd. See figure 9. The low yielding plot had water ponding and stand loss.

As I mentioned in the corn section, the bio strip rotation we first planted in 2009 was our best yielding corn rotation in 2013. It is difficult to say how much of a factor the bio strip was since the year was dry and wet, which brought a lot of “noise” into the system, but apparently it is friendly to corn. In looking at the system of cropping we are using, and comparing to what came about on the same land over the several thousand years since the glaciers left, we don’t have very many different kinds of plants growing. Sure there are some weeds, but the prairie system is reported to have had 500 species of plants growing in it. My question is pretty simple, why? In spite of many people saying Mother Nature is a beautiful symphony of diverse plants and creatures, in reality a bar fight may be a better description. Everything is either eating or being eaten by something else. If we are only growing a small number of species and the prairie system had hundreds, and it lasted for thousands of years, it just might be to our advantage to understand what was going on. It is becoming apparent that our system of using a single chemical to control a pest maybe a short term option. I had once thought as we were able to understand the genetics of not only the crops but also the pests, we would have a virtually unlimited number of chemicals or genetic manipulations to do the job of getting control. When going to meetings on the subject of weed resistance, tillage is offered as a suggestion, I can’t help but question if we have slipped back in time a century or two. I would think we could do better considering what we know about soil erosion.

It is the goal of the Wild Rice Soil Conservation District to educate and help the local land users (for conservation of soil) right here in Sargent County. We do this by offering a variety of services and making available various technical, financial, and educational resources.

USDA is an equal opportunity provider, employer, and lender.